Greenways Ireland was set up to promote greenways all over Ireland. We are a private company who’s aim it is to help both businesses and users of greenways get the most out of these fabulous amenities.

The Greenways Ireland website will become the number one guide for visitors from Ireland and abroad wanting to explore Irelands Greenways.

As the number of Greenways in Ireland is growing we will document all Greenways, current greenways and greenways of the future.

What is a Greenway?

Greenways are trails built to be used exclusively by cyclists, pedestrians and other non motorised transport. They are generally traffic-free routes. With no traffic, the routes are generally safer and can be enjoyed by most members of society.

Greenways are also been built along river and canal towpaths. Both the Royal Canal Greenway and the Suir Blueway are built along old towpaths.

If you are a group or organisation either campaigning or currently constructing a greenway in your area, please get in touch and we will include you on our site.

Please contact us and we will get your Greenway listed.

Strategy for the Future Development of National and Regional Greenways

In 2018 the Irish Government launched the Strategy for the Future Development of National and Regional Greenways. You can download it here:  https://assets.gov.ie/10364/abd98a35c61e4de4ba00a341eb7e0d13.pdf 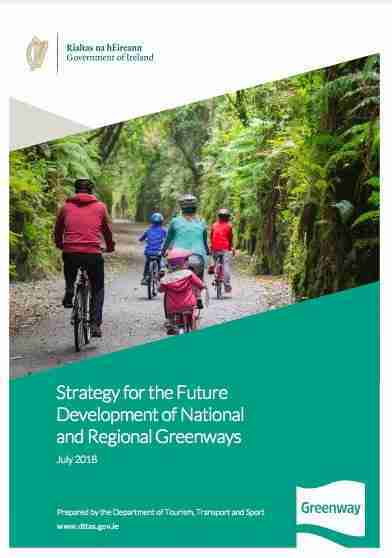 Five S’s in the consideration of a Greenway Design.