Waterford City, Home of the Greenway

Access onto the Waterford Greenway is from two locations – the city centre, on Grattan Quay (plenty of paid parking) and from the Waterford Institute of Technology (WIT) West Campus, a 10-minute drive south west out of the city along the River Suir (plenty of FREE parking). There is also an access point slightly further along the trail at Bilburry.

Waterford has lots of hotel to choose from, particularly along the quays – where places such as Dooley’s, The Granville and Treacy’s offer rooms in the region of €100 per night. Air BnB has some great options also – from quaint and cosy cottages on the outskirts of the city to riverside apartments with stunning views. A single room in an Air BnB costs in the region of €60 per night.

Founded by the Vikings in the 9th century, Waterford is fondly known as Ireland’s oldest city. Rich in history and culture, it’s a great place to base yourself if planning a trip to the sunny south-east. Waterford not only provides great access to the Waterford Greenway but there are lots of other fantastic places to visit in the city itself and its hinterland. Set a day aside to visit the city’s wonderful Museum of Treasures which is located in three different sites within the Viking Triangle. Another must-do is the thrilling King of the Vikings virtual reality tour which immerses visitors in the turbulent and dramatic events of Waterford’s medieval period.

A couple of hundred years after the Vikings founded a settlement at Waterford in the ninth century, the Anglo-Normans arrived and attacked the town in 1170. This new group settled in Waterford in the 1200s and began building a defensive stone wall around the settlement’s perimeter. Today nearly two kilometres of this medieval town wall and six of its towers remain, making it the largest collection of medieval urban defences in Ireland. The most impressive of these towers – Reginald’s Tower, stands proudly at the apex of the Viking Triangle – the name given to the area of the city first settled by the Vikings and now the city’s vibrant historic core.

The city’s award-winning Waterford Treasures museums chronicle the city’s fascinating history in the three historic locations of Reginald’s Tower, the Medieval Museum and the Bishop’s Palace. Also located within the Viking Triangle, ChristChurch Cathedral has been described as the finest 18th century ecclesiastical building in Ireland.

Waterford was home to some impressive figures including Luke Wadding – a 17th century Franciscan friar who established Saint Patrick’s Day as a feast day and Thomas Francis Meagher – an enigmatic figure in the cause of 19th century Irish nationalism and who later fought in the American Civil War. The impressive cable-stayed bridge over the River Suir which connects Counties Kilkenny and Waterford is names after Meagher.

Waterford is the home to the Theatre Royal – the oldest continuous theatre in Ireland and has played host to numerous English monarchs over the centuries. The city’s motto, bestowed by Henry VII in the 15th century reads, ‘Urbs Inacta Manet Waterfordia’ – Waterford the Unconquerable City! 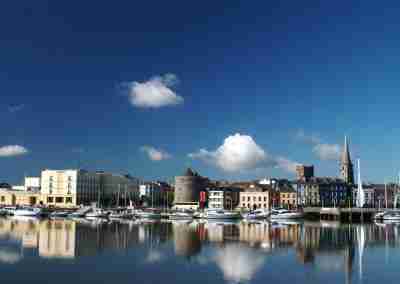 Access to the Greenway is located along the city’s western quay in the WIT West Campus. 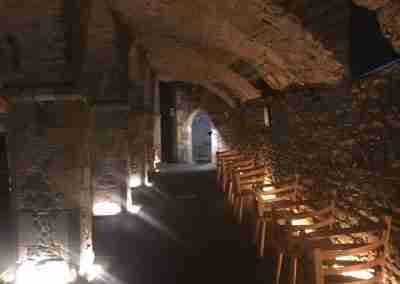 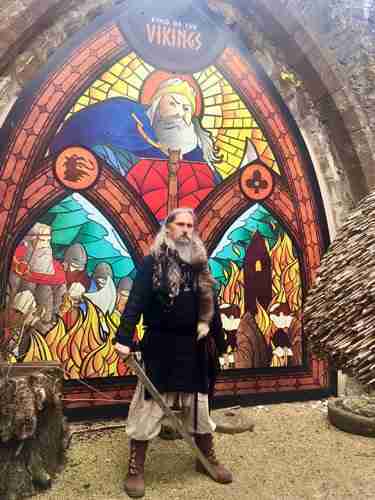 King of the Vikings in Waterford City provides a fantastic virtual reality experience of the virtual world.

The ruins of Blackfriars Abbey are one of many medieval abbeys dotted around the city. 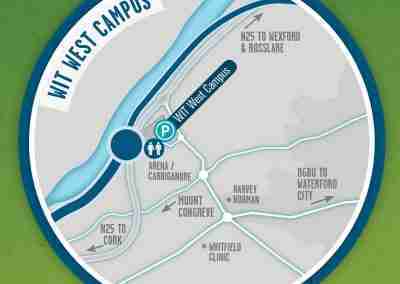 The Greenway can also be accessed from further west along the River Suir at Grattan Quay. 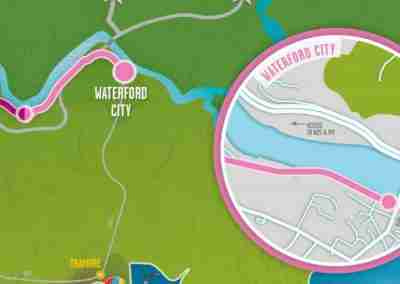 Access to the Greenway from Waterford City is from Grattan Quay